Click here to see our 10.45am live Sunday service or any previous ones or just turn up to the services at 9am or 10.45am. All are welcome.

St Barnabas has a partnership with St Philip’s parish church in Yei, South Sudan. John and Poppy Spens spent five years working in South Sudan with CMS Ireland from 2006 to 2011.  Poppy developed several health programmes while John initially coordinated a vocational training college and micro enterprise scheme and later managed a number of school construction and water and sanitation projects. In 2008, they founded The Brickworks, which became a registered UK charity in 2009. The purpose of The Brickworks is to raise money to support projects in South Sudan.

St Philip’s is a thriving Episcopal Church of Sudan and South Sudan (ECSSS), part of the worldwide Anglican church.  It is led by Pastor Yoasa with good support from a number of both ordained and lay leaders.  It has a thriving Mothers Union, Sunday School, several choirs and has no less than 51 evangelists.  A major focus in the life of St Philip’s Church has been the construction of a new church building to replace its former thatched church.  What has been achieved by this congregation, where few are in paid employment, is truly staggering and we feel privileged to have this partnership with St Philip’s where we feel we can learn so much from their deep commitment to Jesus and their joyful and sacrificial giving. 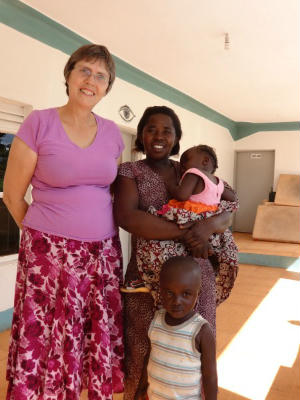 'God loves each and every one of us, as if there was only one of us' St Augustine